From prehistoric art to a printing revolution…

Otley has its origins as a town in Saxon times, its name coming from Othe, Otho or Otta, a personal name, and the Old English for a wood clearing … but its history dates much further back. 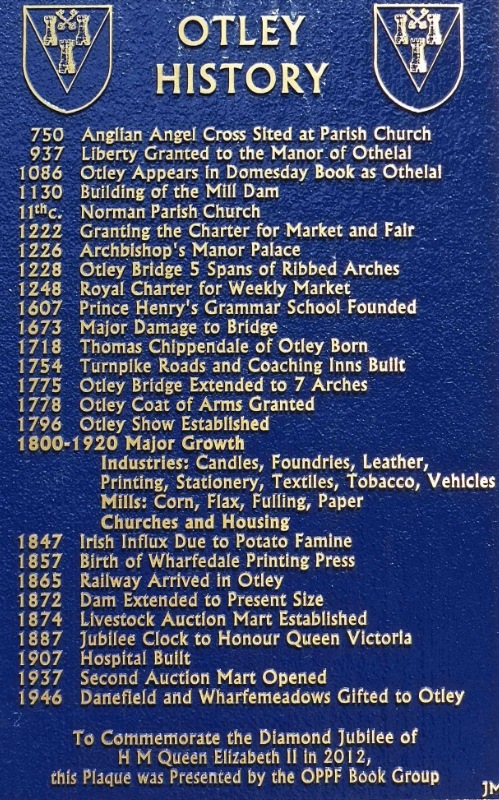 The Wharfedale Valley was carved with the melting of Ice Age glaciers that left behind the dramatic landscapes that surround the town today – and those landscapes hold the key to Otley’s real age. The Chevin that overlooks the town is home to megalithic stone boundaries and paleolithic rock art that mysteriously comes to life when wet, while a Roman road across its highest points once linked York, Tadcaster and Ilkley.

In the town itself, the Parish Church displays remnants of its Saxon heritage thanks to a selection of stone crosses dating from the earliest Christians who came to live here – in the 7th century, Otley was part of an extensive manor between the rivers Humber and Tyne.

Cattle markets began in the town in 1222 defining its future for almost 800 years, and in 1644 the Market Square played host to Oliver Cromwell’s Parliamentarian army on the eve of the Battle of Marston Moor. It’s said they drank the pubs dry before their famous victory!

With the advent of the Industrial Revolution a woollen industry began and the 18th and 19th centuries saw much progress, at a time when Otley helped shaped the very history of Britain.  The Otley Courthouse was built in this period and housed the police and fire station as well as the courthouse. One wing of the building was the home of the police superintendent.

The Courthouse now houses a thriving Arts Centre with regular performances of music, comedy drama and film. Tours of the building are possible by appointment and one of the old prison cells is still in its original condition. The railway came to Otley in the mid-19th century, sadly a victim of the Beeching cuts of the 1960’s, but the Navvies’ Memorial in Church Lane bears testament to the victims of the building of the Railway. 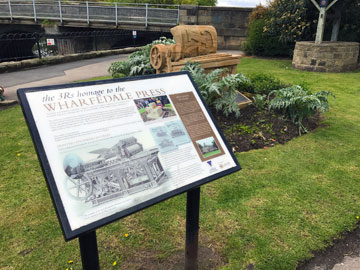 The Wharfedale printing press, developed by David Payne in the 1850s was the first real development in printing since the famous Gutenberg Bible was printed on a wooden press in 1654. The Wharfedale press allowed continuous sheet printing without the need for stopping after every sheet. Up to 1,500 sheets per hour could be printed on these machines and by 1911 over 2,000 people were employed at the various sites in Otley making these presses that were exported all over the world. There are several plaques around Otley chronicling the various productions sites, the names Payne, Dawson, Elliot being associated with the press and its development. A Wharfedale press is one of the many artefacts at the Otley Museum.

Stone quarried from the Chevin was used to help build the Houses of Parliament and famed cabinetmaker Thomas Chippendale was born in Otley in 1718. Educated at Prince Henry’s Grammar School, his 1754 publication The Gentleman and Cabinet Maker’s Director is widely thought to be the first book on interior design.

As Otley’s fame grew, it began to attract the great and good, with romanticist painter JMW Turner spending much time at nearby Farnley Hall. The dramatic landscapes around Wharfedale were used as backdrop to some of his most famous paintings. The then Lord of the manor Walter Ramsden Fawkes was closely related to the not so great and infamous Guy.

About Otley Film Society Otley Film Society is a not for profit organisation that is committed to bringing diverse cinema to Otley.  To find out more about the films, details of membership and how to buy guest tickets, go to www.otleyfilmsociety.org.uk or email info@otleyfilmsociety.org.uk Films are screened on Thursdays at 7.45pm, with the bar open from 7pm. Guest Tickets: £5. ...
END_OF_DOCUMENT_TOKEN_TO_BE_REPLACED
Jan
25
Sat
6:45 pm Burns Night Ceilidh 2020 @ Otley Parish Church
Burns Night Ceilidh 2020 @ Otley Parish Church
Jan 25 @ 6:45 pm – 11:00 pm
Otley Parish Church is hosting a great Burns Night bash on January 25 With proceeds going to the Church Bells Maintenance Fund, the event will include a haggis ceremony, haggis supper, complementary nip of whisky, a raffle and an open bar. Music will be provided by the Village Hop Ceilidh Band. Call 07703 192 907 to book, or email OtleyBellsFund@gmail.com
8:00 pm Martyn Joseph @ Otley Courthouse
Martyn Joseph @ Otley Courthouse
Jan 25 @ 8:00 pm – 10:00 pm

Martyn Joseph is a completely unique and mind blowing artist. Take everything you think you know about singer songwriters….and rip it up. For one man and a guitar he creates a performance with a huge far-reaching sound that is energetic, compelling and passionate. Be it to two hundred people or twenty thousand, he blows the crowd away night after night. ...
END_OF_DOCUMENT_TOKEN_TO_BE_REPLACED
Jan
26
Sun
9:00 am Otley Farmers’ Market – Jan 2020 @ Market Place, Otley
Otley Farmers’ Market – Jan 2020 @ Market Place, Otley
Jan 26 @ 9:00 am – 1:00 pm

The critically acclaimed West End revival of Michael Stewart and Mark Bramble’s 42nd Street will be screened at Otley Courthouse.  This legendary musical stars national treasure Bonnie Langford as Dorothy Brock with music and lyrics by Harry Warren and Al Dubin. 42nd Street tells the story of Peggy Sawyer, a talented young performer with stars in her eyes who gets ...
END_OF_DOCUMENT_TOKEN_TO_BE_REPLACED
View Calendar