From buzzing bistros to pulsing pubs…

Otley may be a small market town but it’s a cracking night out. Once thought to have to highest number of pubs per capita in the country, there are still more than 20 to choose from, all serving up some fine local ales and craft beer, and many also offering food. 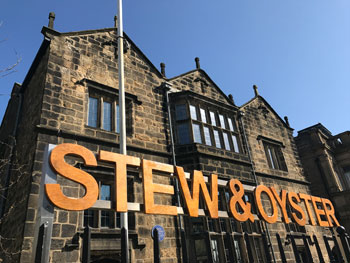 Hostelries range from traditional ale houses such as The Black Bull in Market Square, where Oliver Cromwell’s troops are said to have drunk the town dry on the eve of the Battle of Marston Moor in 1644, and the Old Cock (a former Leeds CAMRA pub of the year), to the cool, modern Stew & Oyster, housed in the old traditional surrounds of the Old Grammar School.

For cocktails and music, look out for North Bar Social and Rocca, while Korks offers a regular programme of live music on many days of the week, with their All done for 9 session, held on the last Sunday of the month, session proving a popular stop-off for many. 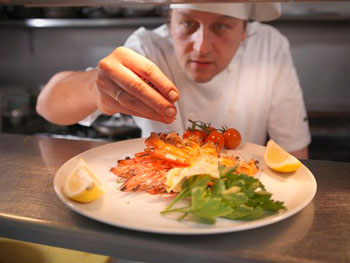 Looking to dine out while in Otley? There’s a great selection of restaurants including the modern British offering of Otah’s Leah, Mediterranean and Moroccan delights at Mdeena, and several Indian restaurants such as Red Pepper in town and Westbourne Spice just outside – if you love naan bread, you’re in for a particular treat here. For high-end Italian, sample the delights of award-winning Buon Apps (pictured), also just outside town, with a riverside location and a heated patio, perfect for summer evenings. There are also ‘pop-up’ offerings at the Milk Bar Cafe which doubles as an evening bistro, and the Dales Cafe, which turns into a popular Greek restaurant at night.

It it’s arts and culture you’re after, then be sure head to Otley Courthouse, the former police station and magistrates court that is now a thriving independent arts centre offering theatre, cinema, talks and concerts.

Click on the quick links below for more details on Otley’s vibrant night scene.

About Otley Film Society Otley Film Society is a not for profit organisation that is committed to bringing diverse cinema to Otley.  To find out more about the films, details of membership and how to buy guest tickets, go to www.otleyfilmsociety.org.uk or email info@otleyfilmsociety.org.uk Films are screened on Thursdays at 7.45pm, with the bar open from 7pm. Guest Tickets: £5. ...
END_OF_DOCUMENT_TOKEN_TO_BE_REPLACED
Jan
25
Sat
6:45 pm Burns Night Ceilidh 2020 @ Otley Parish Church
Burns Night Ceilidh 2020 @ Otley Parish Church
Jan 25 @ 6:45 pm – 11:00 pm
Otley Parish Church is hosting a great Burns Night bash on January 25 With proceeds going to the Church Bells Maintenance Fund, the event will include a haggis ceremony, haggis supper, complementary nip of whisky, a raffle and an open bar. Music will be provided by the Village Hop Ceilidh Band. Call 07703 192 907 to book, or email OtleyBellsFund@gmail.com
8:00 pm Martyn Joseph @ Otley Courthouse
Martyn Joseph @ Otley Courthouse
Jan 25 @ 8:00 pm – 10:00 pm

Martyn Joseph is a completely unique and mind blowing artist. Take everything you think you know about singer songwriters….and rip it up. For one man and a guitar he creates a performance with a huge far-reaching sound that is energetic, compelling and passionate. Be it to two hundred people or twenty thousand, he blows the crowd away night after night. ...
END_OF_DOCUMENT_TOKEN_TO_BE_REPLACED
Jan
26
Sun
9:00 am Otley Farmers’ Market – Jan 2020 @ Market Place, Otley
Otley Farmers’ Market – Jan 2020 @ Market Place, Otley
Jan 26 @ 9:00 am – 1:00 pm

The critically acclaimed West End revival of Michael Stewart and Mark Bramble’s 42nd Street will be screened at Otley Courthouse.  This legendary musical stars national treasure Bonnie Langford as Dorothy Brock with music and lyrics by Harry Warren and Al Dubin. 42nd Street tells the story of Peggy Sawyer, a talented young performer with stars in her eyes who gets ...
END_OF_DOCUMENT_TOKEN_TO_BE_REPLACED
View Calendar