Otley has played a significant role in the history of Great Britain, from early pre-historic art on the Chevin, to stone quarried in the town being used to help build the Palace of Westminster – the Houses of Parliament – in London. Many of the most significant events in the town’s history are commemorated around Otley. 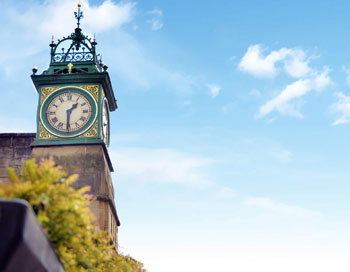 Perhaps the iconic image of Otley and notional centre of the town, the Jubilee Clock Tower was built in 1887 to celebrate the Golden Jubilee of Queen Victoria‘s reign. The original listing of the building reads:

Stone built clock tower on the site of the original Market Cross. Ornamental ironwork crown. Stone base has door and drinking trough. Clock on four faces. “The inhabitants of the town were exercising their minds to find some suitable and lasting method of marking the Queen’s Jubilee”, 1887.

Several plaques have been added in the intervening years. One is one behalf of the Belgian Refugees who thanked the people of Otley for their hospitality during World War I and another is to celebrate the Diamond Jubilee of Queen Elizabeth II. The clock tower now overlooks Otley’s thrice-weekly  market and monthly farmers’ market. 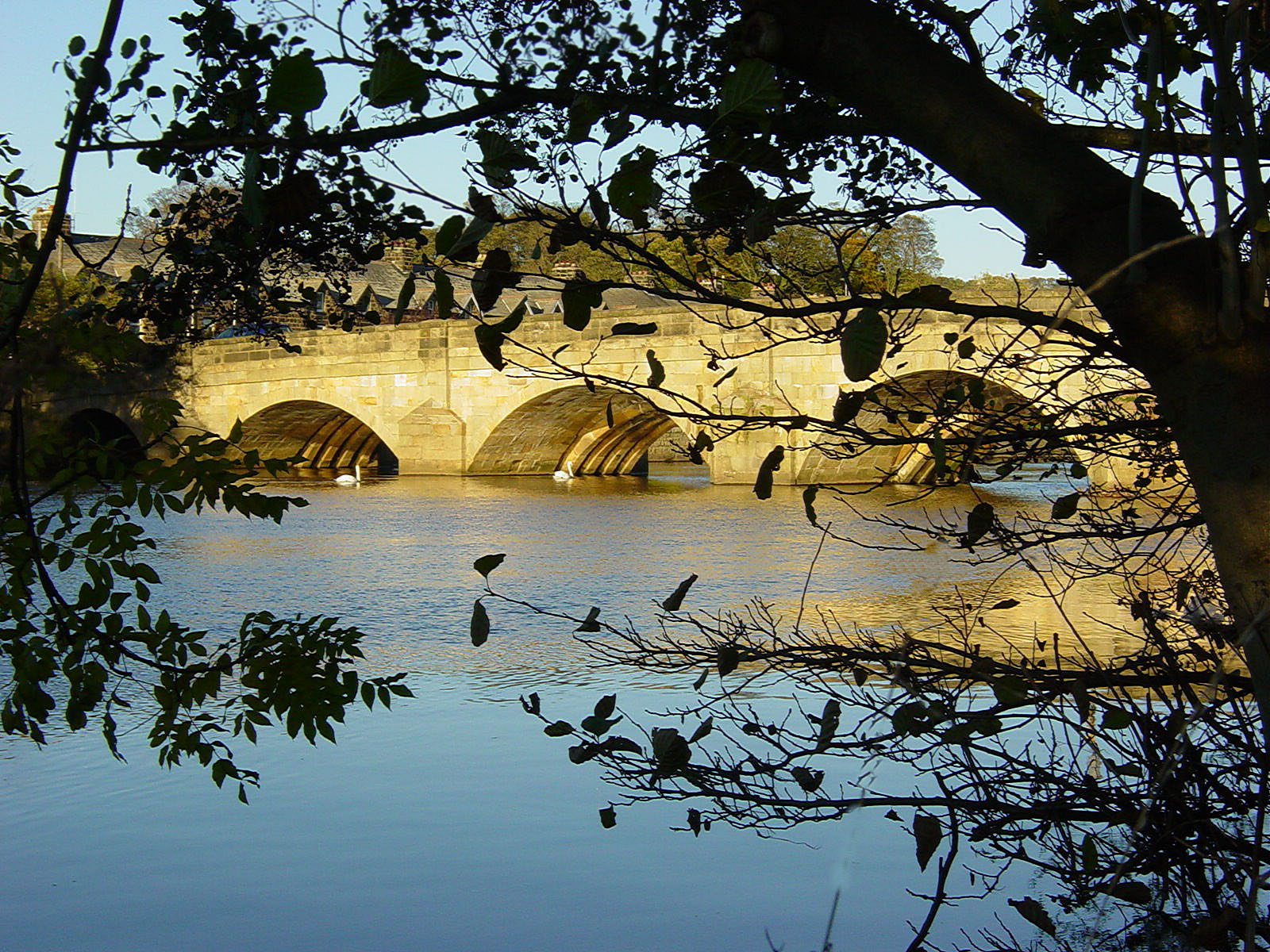 Otley Bridge is a Scheduled Ancient Monument.  It is also the focal point of the Riverside area of the Otley Conservation Area. Otley Bridge carries the B6451 over the River Wharfe and links the two halves of Otley town.  The next river crossing is more than two miles away at Pool to the east or over five miles to the west at Ilkley.  The eastern part dates back to 1228, when the Archbishop of York, titular Lord of the Manor of Otley, had it built to provide a more direct route to York.

It was substantially rebuilt, including widening on the western side, in 1775-6, planned and overseen by John Gott, subsequently Surveyor of Bridges for the West Riding of Yorkshire. Growth of traffic in the 20th century and demands for a safe pedestrian crossing resulted in the addition of a cantilevered pedestrian walkway on the western side in 1957.

In summer, the bridge provides a home for a colony of Daubenton’s bats who live under the arches and who skim over the water looking for insects as night falls. 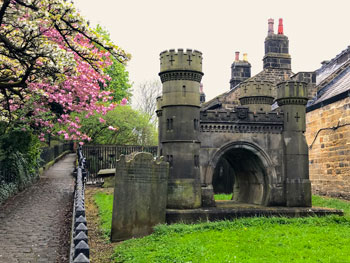 The memorial is a replica of the north portal of the Bramhope Tunnel which runs for more than two miles on the Harrogate Line between Horsforth station and the Arthington Viaduct.

It was built for the Leeds & Thirsk Railway between 1846 and 1849 with Thomas Grainger as the engineer and James Bray the contractor. At the time, railway mania was overtaking the country and there was much pressure to ensure the work was done on time.

Some 2,000 men worked on the tunnel during its construction, many of them living with their families in an informal shanty town on the Chevin which overlooks Otley.

As with many major construction projects of the day, health and safety measures were not up to modern standards and 23 men lost their lives during construction. The memorial provides a record of their names and is a Grade-II listed building. See this link for more Thanks to Soul Architects for these words 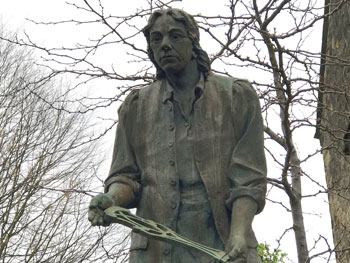 World-famous furniture designer Thomas Chippendale was born in Otley in June 1718 and educated in the old Grammar School (now the Stew & Oyster pub) on Manor Square. Chippendale left the town in his late teens to make his fortune in London where he became a cabinet-maker in London, designing furniture in the mid-Georgian, English Rococo, and Neoclassical styles.

His 1754 book, The Gentleman and Cabinet Maker’s Directory is thought to be be one of the first books ever published on interior design, setting the tone for a profession that endures to this day. Those designs are still reproduced globally, but original Chippendale’s are highly sought after and highly valued. A padouk cabinet that came up for auction by Christies in 2008 sold for £2,729,250!

A statue and blue plaque in his honour can be found outside the Old Grammar School. 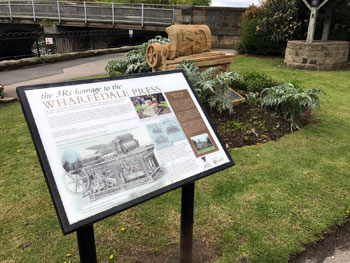 As well as there being several monuments dedicated to a long bygone era, two new structures are in place to commemorate more recent events in Otley.

A sandstone depiction of the famous Wharfedale Printing Press of the Victorian era was put in place recently. The Wharfedale Machine revolutionised the printing industry more than a century ago by allowing mass printing at speed. Invented in Otley in 1856 by Dawson, Payne and Elliot, part of Vickers Printing Machinery Group, it provided the first significant progress in printing since Gutenberg printed his famous Bible on a wooden press in Germany in 1454.

Thousands of the machines were built and the Wharfedale dominated world markets for many years and it continued to be manufactured right up to modern times. As recently as 1965, an order was placed with Dawson, Payne and Elliott for 28 of the machines to print the Holy Koran in Pakistan. 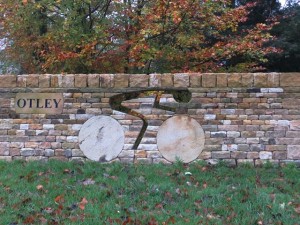 In 2014, the Grand Depart of the famed Tour de France passed through Otley, honouring the town’s rich cycling history in the process and providing inspiration for hundreds of local riders to take to the challenging hills that surround the town. On the entrance to town on the A660 entry to Otley from Burley, a dry-stone wall has been erected to commemorate the event.

Incidentally, Otley is still one of the only towns in the Dales where people can learn the ancient art of dry stone walling, thanks to the efforts of the Otley & Yorkshire Dales branch of the Dry Stone Walling Association who are involved with the development and promotion of the craft of dry stone walling in the Yorkshire Dales, and offer several courses for beginners.

About Otley Film Society Otley Film Society is a not for profit organisation that is committed to bringing diverse cinema to Otley.  To find out more about the films, details of membership and how to buy guest tickets, go to www.otleyfilmsociety.org.uk or email info@otleyfilmsociety.org.uk Films are screened on Thursdays at 7.45pm, with the bar open from 7pm. Guest Tickets: £5. ...
END_OF_DOCUMENT_TOKEN_TO_BE_REPLACED
Jan
25
Sat
6:45 pm Burns Night Ceilidh 2020 @ Otley Parish Church
Burns Night Ceilidh 2020 @ Otley Parish Church
Jan 25 @ 6:45 pm – 11:00 pm
Otley Parish Church is hosting a great Burns Night bash on January 25 With proceeds going to the Church Bells Maintenance Fund, the event will include a haggis ceremony, haggis supper, complementary nip of whisky, a raffle and an open bar. Music will be provided by the Village Hop Ceilidh Band. Call 07703 192 907 to book, or email OtleyBellsFund@gmail.com
8:00 pm Martyn Joseph @ Otley Courthouse
Martyn Joseph @ Otley Courthouse
Jan 25 @ 8:00 pm – 10:00 pm

Martyn Joseph is a completely unique and mind blowing artist. Take everything you think you know about singer songwriters….and rip it up. For one man and a guitar he creates a performance with a huge far-reaching sound that is energetic, compelling and passionate. Be it to two hundred people or twenty thousand, he blows the crowd away night after night. ...
END_OF_DOCUMENT_TOKEN_TO_BE_REPLACED
Jan
26
Sun
9:00 am Otley Farmers’ Market – Jan 2020 @ Market Place, Otley
Otley Farmers’ Market – Jan 2020 @ Market Place, Otley
Jan 26 @ 9:00 am – 1:00 pm

The critically acclaimed West End revival of Michael Stewart and Mark Bramble’s 42nd Street will be screened at Otley Courthouse.  This legendary musical stars national treasure Bonnie Langford as Dorothy Brock with music and lyrics by Harry Warren and Al Dubin. 42nd Street tells the story of Peggy Sawyer, a talented young performer with stars in her eyes who gets ...
END_OF_DOCUMENT_TOKEN_TO_BE_REPLACED
View Calendar