Places of worship for all…

Otley’s status as a Christian town is thought to date back to when Christianity first arrived in Britain in the 2nd century AD and strong traditions remain to this day, including the elevation of a cross on Surprise View every Easter. 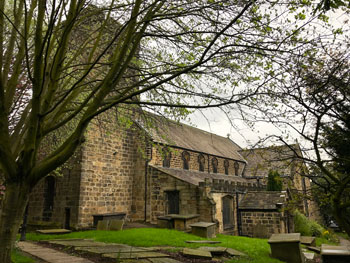 The Parish Church may have been consecrated as early as the 2nd century AD when Christianity first came to Britain. The earliest evidence of Christian worship is fragments of Anglian crosses, the oldest being dated at around 750 AD. These crosses will have been used as focal points for Christian gatherings before church buildings were erected.

The first church building on the site was Anglo Saxon but only the foundations still remain. A Norman church was built over those foundations during the 11th century, and this forms the present day chancel. It was enlarged in about 1240 by the addition of a wide nave, a north and south transept and a plain unbuttressed tower. Further additions and modifications took place during later centuries, including the magnificent stained-glass East Window in 1851.

There is still much evidence of its history, both inside and outside the church, in the form of architectural features, memorials and artefacts. There is a booklet of historical notes available at the back of the church. 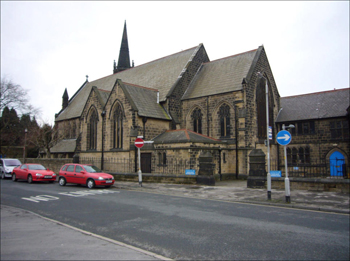 The Society of Independents (or Congregationalists) was formed in Otley in 1821, first meeting for worship in the Assembly Rooms above the Bowling Green pub in Bondgate. The members of the Society were a mixture of native Otley people and Scottish drapers who had settled in the town. In 1825 they moved for a short time to a room behind the Black Bull (The Pump Chapel).

In 1826 they opened their first purpose built chapel, Salem Chapel, in Bridge Street, and soon called their first minister, Rev James Swift Hastie, who was minister for nearly 50 years. A Sunday School was built to the rear in 1835 and the chapel extended in 1856. Many of Otley’s industrialists were members and the growth of the town because of that industry necessitated newer and larger buildings. A new hall and Sunday School were opened on new land to the rear in 1882 and the new Otley Congregational Church was opened in 1899 on the site of the old chapel. These are the buildings we see today. The hall was rebuilt following a major fire in 1993.

Our Lady and All Saints Roman Catholic Church 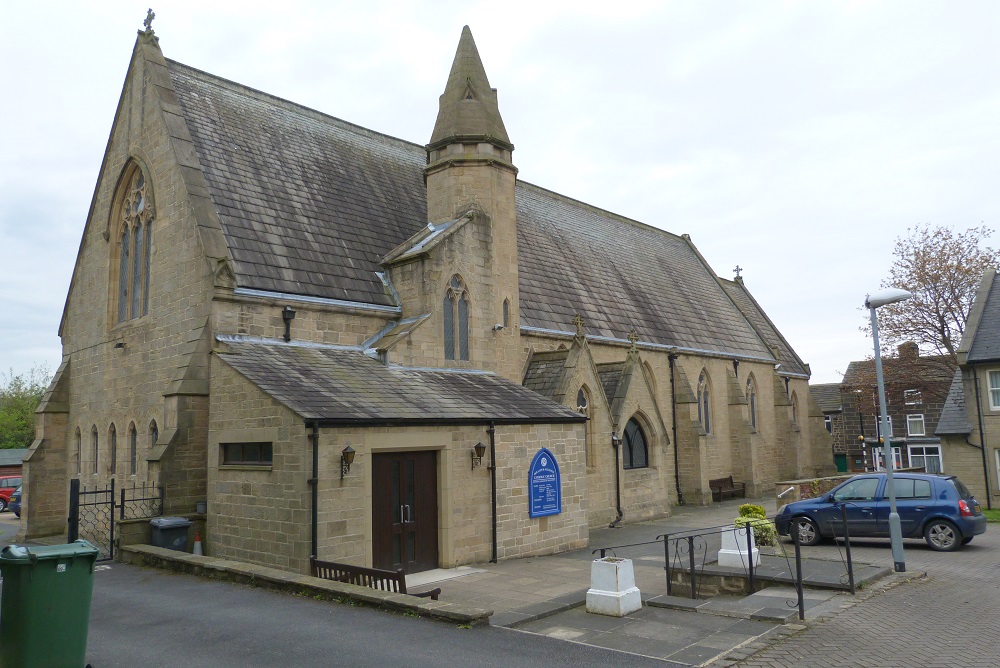 The Church celebrated its 150th anniversary on 24th June 2001 having being built by Thomas Constable in 1851 in the grounds of the Manor House at a cost of £4,000. Ten years later, the west end of the church was added.

During the 1840s, a number of Irish families were invited by Constable to live in Otley to escape the ravages of the Irish Potato Famine. They initially were settled in tents on what has become known as Irish Fields. With the increase in the number of Roman Catholic people in Otley, the church was built to eliminate the seven mile trek to Middleton Lodge, Ilkley every Sunday to celebrate Mass.

A number of the Irish people arrived starving , with famine related diseases and the young particularly suffered with a number dying soon after their arrival in Otley. In 2001, a memorial stone was positioned in the outside of the south wall of the church to commemorate the burial of some 50 people in the grounds of the Parish Church. At that time, there was no consecrated ground in Otley for Roman Catholic burials. 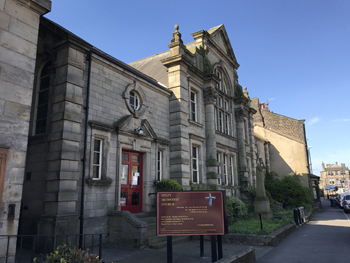 Methodism sprang up in Otley around 1740, largely due to the impassioned preaching of John Nelson, a stonemason from Birstall. The road in front of the Post Office still bears his name.

The early Methodists met first at Green Lane near the old railway line and then built their first chapel on the site of HSBC in Nelson Street in 1771. John Wesley, the founder of Methodism, was to preach here and to visit Otley on a score of occasions during his tireless journeys on horseback round the country. He developed a warm friendship with the Ritchie family and a plaque may be seen outside their former home in Boroughgate.

Methodist numbers grew phenomenally and a bigger Chapel was built in 1825, now part of Chevin Court. Finally, the present Chapel was erected in Boroughgate in 1875 with a seating capacity of 1000.

The Churches together in Otley group gather together each year to place a cross on the Chevin top overlooking Otley. This powerful symbol of Easter is put in place two weeks before Easter and taken down two weeks after

Other Churches include the Salvation Army, New Life Church and the Society of Friends

Thanks to John Morgan for these words on the Churches

About Otley Film Society Otley Film Society is a not for profit organisation that is committed to bringing diverse cinema to Otley.  To find out more about the films, details of membership and how to buy guest tickets, go to www.otleyfilmsociety.org.uk or email info@otleyfilmsociety.org.uk Films are screened on Thursdays at 7.45pm, with the bar open from 7pm. Guest Tickets: £5. ...
END_OF_DOCUMENT_TOKEN_TO_BE_REPLACED
Jan
25
Sat
6:45 pm Burns Night Ceilidh 2020 @ Otley Parish Church
Burns Night Ceilidh 2020 @ Otley Parish Church
Jan 25 @ 6:45 pm – 11:00 pm
Otley Parish Church is hosting a great Burns Night bash on January 25 With proceeds going to the Church Bells Maintenance Fund, the event will include a haggis ceremony, haggis supper, complementary nip of whisky, a raffle and an open bar. Music will be provided by the Village Hop Ceilidh Band. Call 07703 192 907 to book, or email OtleyBellsFund@gmail.com
8:00 pm Martyn Joseph @ Otley Courthouse
Martyn Joseph @ Otley Courthouse
Jan 25 @ 8:00 pm – 10:00 pm

Martyn Joseph is a completely unique and mind blowing artist. Take everything you think you know about singer songwriters….and rip it up. For one man and a guitar he creates a performance with a huge far-reaching sound that is energetic, compelling and passionate. Be it to two hundred people or twenty thousand, he blows the crowd away night after night. ...
END_OF_DOCUMENT_TOKEN_TO_BE_REPLACED
Jan
26
Sun
9:00 am Otley Farmers’ Market – Jan 2020 @ Market Place, Otley
Otley Farmers’ Market – Jan 2020 @ Market Place, Otley
Jan 26 @ 9:00 am – 1:00 pm

The critically acclaimed West End revival of Michael Stewart and Mark Bramble’s 42nd Street will be screened at Otley Courthouse.  This legendary musical stars national treasure Bonnie Langford as Dorothy Brock with music and lyrics by Harry Warren and Al Dubin. 42nd Street tells the story of Peggy Sawyer, a talented young performer with stars in her eyes who gets ...
END_OF_DOCUMENT_TOKEN_TO_BE_REPLACED
View Calendar