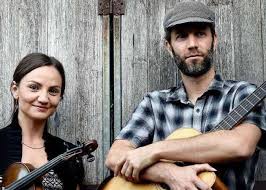 Tim McMillan & Rachel Snow are a duo from Melbourne, Australia, currently based in Germany. They entertain and delight audiences across the world performing over 140 concerts each year. Tim is a percussive finger-style guitarist and outlandish yarn spinner and Rachel is an exceptional violinist and accomplice in Tim’s whimsical narrative.

Together they perform an inventive mix of styles including Celtic rock, folk, metal & jazz. Tim and Rachel’ss hows are filled with athletic guitar stunts, interwoven violin antics and a magical blend of vocals accompanied by hilarious stories of life on the road and tales from the Australian bush.

After many years performing and touring together, Tim and Rachel have captured their entrancing sound on their first fully collaborative work – Dawn EP. Rachel also features on Tim’s latest album ‘Hiraeth’, which is a collection of instrumental pieces and songs composed and recorded while on tour through Europe. Hiraeth also features a variety of guest musicians from the rock world including members of Motörhead, The Sisters of Mercy, Ugly Kid Joe, Ghost and Mr Bungle.

Martyn Joseph is a completely unique and mind blowing artist. Take everything you think you know about singer songwriters….and rip it up. For one man and a guitar he creates a performance with a huge far-reaching sound that is energetic, compelling and passionate. Be it to two hundred people or twenty thousand, he blows the crowd away night after night. ...
END_OF_DOCUMENT_TOKEN_TO_BE_REPLACED
Jan
26
Sun
9:00 am Otley Farmers’ Market – Jan 2020 @ Market Place, Otley
Otley Farmers’ Market – Jan 2020 @ Market Place, Otley
Jan 26 @ 9:00 am – 1:00 pm