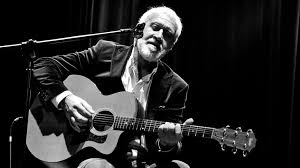 Gordon Haskell has often been described as a brilliant mix of Bill Withers and James Taylor with the feel of J.J Cale; but ultimately Haskell is a craftsman with his own unique style and presence, who has been consistently winning audiences with his warmth and golden voice for decades.
After 35 years of dedication to developing his craft of the singer-songwriter, Gordon Haskell finally broke through in 2001 with his hugely popular song ‘How Wonderful You Are’ reaching No. 2 in the UK chart and top chart positions right across Europe.
In 2002 his albums ‘Harry’s Bar’ and ‘Shadows on the Wall’ reached No. 2 and No 44 in the UK chart, and in the top 20 in Germany, France, Poland, Finland and the Netherlands. Both albums reached Gold status with the single selling 400,000+.
Since then he has continued to perform and record mostly in Europe, travelling from his home in Greece, and released book ‘The Road to Harry’s Bar’.
Having had a handful of sporadic concerts (& hugely successful) live appearances since, Gordon returns to the road in 2019 to bring his jazz/blues-influenced songbook and golden voice back to theatre audiences nationwide; up-close, intimate evenings with Gordon Haskell – the master singer-songwriter.

Martyn Joseph is a completely unique and mind blowing artist. Take everything you think you know about singer songwriters….and rip it up. For one man and a guitar he creates a performance with a huge far-reaching sound that is energetic, compelling and passionate. Be it to two hundred people or twenty thousand, he blows the crowd away night after night. ...
END_OF_DOCUMENT_TOKEN_TO_BE_REPLACED
Jan
26
Sun
9:00 am Otley Farmers’ Market – Jan 2020 @ Market Place, Otley
Otley Farmers’ Market – Jan 2020 @ Market Place, Otley
Jan 26 @ 9:00 am – 1:00 pm