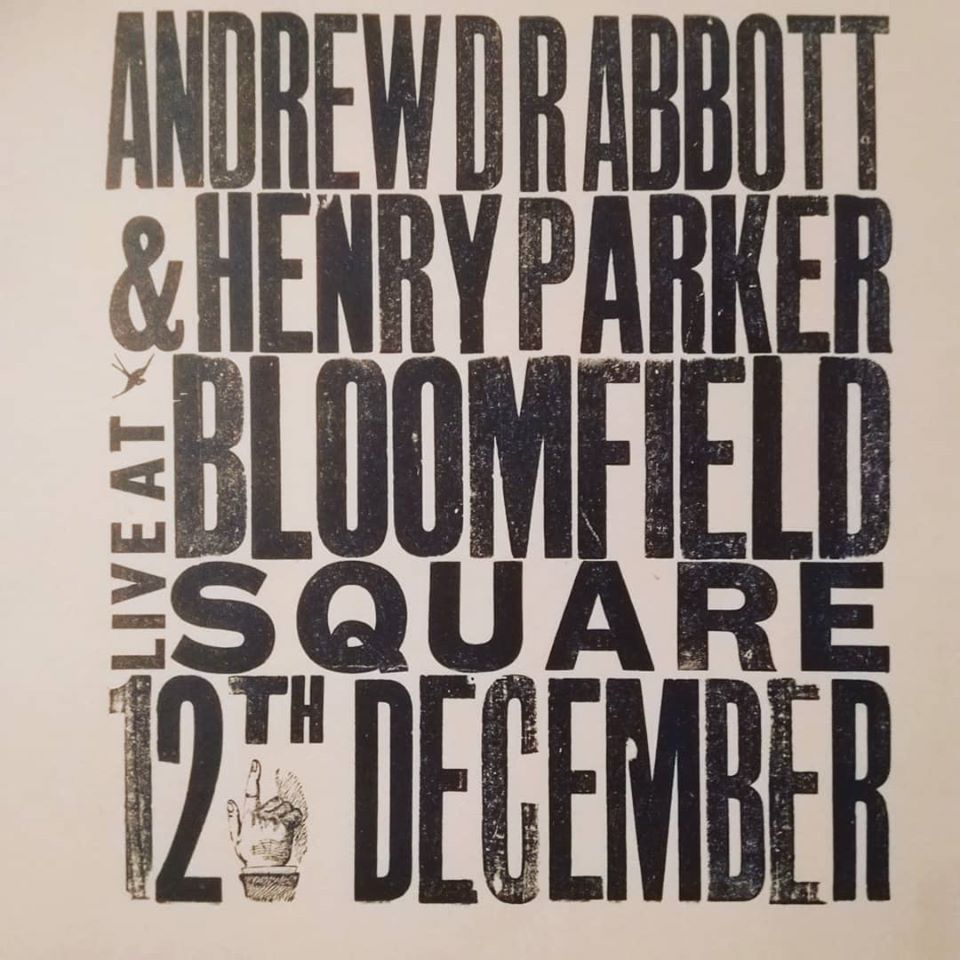 Andrew DR Abbott is a guitar player currently living in Bradford, touring his debut solo album ‘Dead in Chellow Dean’. He’s been at the cafe before, not just drinking coffee, but performing alongside David Thomas Broughton. We’re pleased to have him back to hear him play his new record.

Here’s a bit about it:

Through a series of instrumental 8-string baritone acoustic guitar compositions, Abbott conveys a dark and disorientating journey through the beautifully derelict hinterlands of Bradford: the postindustrial city in the North of England where he lives. The core tracks of the album are joined together by collages of field recordings and improvisations on handmade instruments.

Best known for his deafening guitar work in the bands That Fucking Tank and NOPE, Dead in Chellow Dean is Abbott’s most personal and introspective work to date. The rough, heavy and at times dissonant and fragile qualities of Abbott’s fingerstyle guitar and woozy interludes create a psychedelic soundtrack to the shadowy sides of present-day Bradford. Dead in Chellow Dean is a folk horror interpretation of life in the liminal space between the urban and rural, deprivation and affluence, the everyday and the magically surreal.

Using the fingerpicking techniques of Fahey, Basho, Kottke and Knopfler as a base to create his own twisting, non-linear compositions, Abbott weaves in influences from UK guitar contemporaries like Richard Dawson, Steven Malley (The Horse Loom), Dean McPhee and Gwenifer Raymond. More post-hardcore than trad-folk, Joe Osborne’s roomy recording truly captures the dynamics of Abbott’s playing from sparse heavy minimalism through to moments of derailed intensity.

Support is from another fantastic Bradford-based guitarist, Henry Parker.

About Otley Film Society Otley Film Society is a not for profit organisation that is committed to bringing diverse cinema to Otley.  To find out more about the films, details of membership and how to buy guest tickets, go to www.otleyfilmsociety.org.uk or email info@otleyfilmsociety.org.uk Films are screened on Thursdays at 7.45pm, with the bar open from 7pm. Guest Tickets: £5. ...
END_OF_DOCUMENT_TOKEN_TO_BE_REPLACED
Jan
25
Sat
6:45 pm Burns Night Ceilidh 2020 @ Otley Parish Church
Burns Night Ceilidh 2020 @ Otley Parish Church
Jan 25 @ 6:45 pm – 11:00 pm
Otley Parish Church is hosting a great Burns Night bash on January 25 With proceeds going to the Church Bells Maintenance Fund, the event will include a haggis ceremony, haggis supper, complementary nip of whisky, a raffle and an open bar. Music will be provided by the Village Hop Ceilidh Band. Call 07703 192 907 to book, or email OtleyBellsFund@gmail.com
8:00 pm Martyn Joseph @ Otley Courthouse
Martyn Joseph @ Otley Courthouse
Jan 25 @ 8:00 pm – 10:00 pm

Martyn Joseph is a completely unique and mind blowing artist. Take everything you think you know about singer songwriters….and rip it up. For one man and a guitar he creates a performance with a huge far-reaching sound that is energetic, compelling and passionate. Be it to two hundred people or twenty thousand, he blows the crowd away night after night. ...
END_OF_DOCUMENT_TOKEN_TO_BE_REPLACED
Jan
26
Sun
9:00 am Otley Farmers’ Market – Jan 2020 @ Market Place, Otley
Otley Farmers’ Market – Jan 2020 @ Market Place, Otley
Jan 26 @ 9:00 am – 1:00 pm

The critically acclaimed West End revival of Michael Stewart and Mark Bramble’s 42nd Street will be screened at Otley Courthouse.  This legendary musical stars national treasure Bonnie Langford as Dorothy Brock with music and lyrics by Harry Warren and Al Dubin. 42nd Street tells the story of Peggy Sawyer, a talented young performer with stars in her eyes who gets ...
END_OF_DOCUMENT_TOKEN_TO_BE_REPLACED
View Calendar